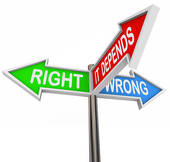 I got an email the other day making the claim that “33,000 recruiters can’t be wrong.” The email wanted me to buy whatever it was that the company was selling (OK, the email didn’t want that. Emails are inanimate objects and don’t actually want anything. But I digress.) The first thought that popped into my head was “just how many recruiters are there, anyway?” As it turns out, I have no idea. I lost interest in the Google results long before I was able to make a real go at finding out. What I did uncover was that according to one person’s research, in 2009, there were over 1,000,000 recruiters registered on Linkedin. To my thinking, if there are one million recruiters slinking about then there must be at least a bajillion so-called career experts out there hawking their wares. The internet and social media have made it increasingly easy for anyone with a domain name and a dream to become an “expert” in his or her respective field. And while there are a lot of really smart people out there giving career advice, there are a definitely some others who, well, let’s just say there are some others.

Throughout the days after I received it, I became increasingly obsessed with the title of that little semi-spammy email. Just because a lot of people think the same thing doesn’t make them right, right? If we always went with the majority viewpoint minorities still wouldn’t have the right to vote, the Earth would still be flat, and the Backstreet Boys would still be together. No, friends, just because lots of people agree on something doesn’t mean it’s right. Especially for your career. With that in mind, here are three pieces of advice that at least 33,000 career experts (please don’t ask me to list them) agree on and that you can feel free to disregard.

Disclaimer #1: Just because these statements don’t hold true for the vast majority of us doesn’t mean that they’re for everyone. If you think you’re in the minority and that these gems don’t apply to you, drop me a line and I’ll tell you if I agree.

Disclaimer #2: I absolutely include myself in the “domain name and a dream” category. Keep this in mind when you’re deciding whether I’m full of it: I’m not a professional career expert or coach, so I don’t have a thing to sell you. I’m just a guy with a pretty good track record in HR, Recruitment and Management who likes to write. Nobody can decide what’s best for you, because in the end you’re the one who’s responsible for the decisions you make, the career you pursue, and the glitter with which you stuff the envelope.

Have you gotten bad career advice? Good advice? Advice that has you at a loss over whether it’s good or it sucks? Leave a comment below or email me at hr.dave1@gmail.com and we’ll see if we can get it sorted out.

David Gaspin (HR Dave) has hired, developed, coached, counseled, and advised hundreds of professionals at every stage of their careers on how to successfully navigate their careers and job searches, and is proud to have played a part in the professional growth of each of them. Over the course of his career he has recruited for positions at every level and has interviewed and hired thousands of professionals across a variety of functions.  David is currently the Senior Vice President of Human Resources for a ground-breaking high-growth company in New York. He holds an MBA from Baruch College/CUNY and a Bachelor of Music from the Hartt School of Music. All opinions expressed on this site are David's only and are not explicitly or implicitly endorsed by, or necessarily shared by, any organization. View all posts by HR Dave

The Most Important Sites for Your Career